the
Committees of Protection, Correspondence and Safety
of the various States
United under and by
the
Constitution of the United States of America 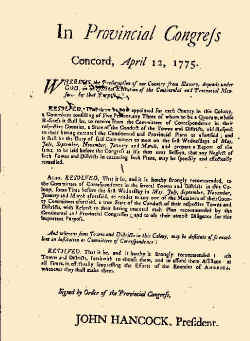 HEREAS the Preservation of our Country from Slavery, depends under God, on an effectual Execution of the Continental and Provincial Measures for that Purpose:

RESOLVED, That there be now appointed for each County in this Colony, a Committee consisting of Five Persons, any Three of whom to be a Quorum, whose Business it shall be, to receive from the Committees of Correspondence in their respective Counties, a State of the Conduct of the Towns and Districts, with Respect to their having executed the Continental and Provincial Plans as aforesaid ; and it shall be the Duty of said Committees to meet on the first Wednesdays of May, July, September, November, January and March, and prepare a Report of the same, to be laid before the Congress at it's then next Session, that any Neglect of such Towns and Districts in executing such Plans, may be speedily and effectually remedied.

Also, RESOLVED, That it be, and it is hereby strongly recommended, to the Committees of Correspondence in the several Towns and Districts in this Colony, some Time before the first Wednesday in May, July, September, November, January and March aforesaid, to render to any one of the Members of their County Committees aforesaid, a true State of the Conduct of their respective Towns and Districts, with Respect to their having executed each Plan recommended by the Continental and Provincial Congresses ; and to use their utmost Diligence for this important Purpose.

And whereas some Towns and Districts in the Colony, may be destitute of so excellent an Institution as Committees of Correspondence :

RESOLVED, That it be, and it hereby is strongly recommended to such Towns and Districts, forthwith to choose them, and to afford them Assistance at all Times, in effectually suppressing the Efforts of the Enemies of America, whenever they shall make them.

Signed by Order of the Provincial Congress,

The Coalition of American Patriots is composed of
members who wish to set aside their differences
in favor of working together to restore constitutional Government.